Why golfers BENEFIT so much from finding their heels

If you aren’t already, stand up, and notice where your weight is on your feet. I bet you that you are on your mid-foot and/or toes. Don’t worry, this is normal, but not ideal if you want to be a better golfer or stay out of pain.​

What you’ve discovered is how weight distribution affects posture and muscle activation. As humans we tend to default to having our weight forward, which kicks in our back and quads (see the image below. Anterior tilt = weight on toes). 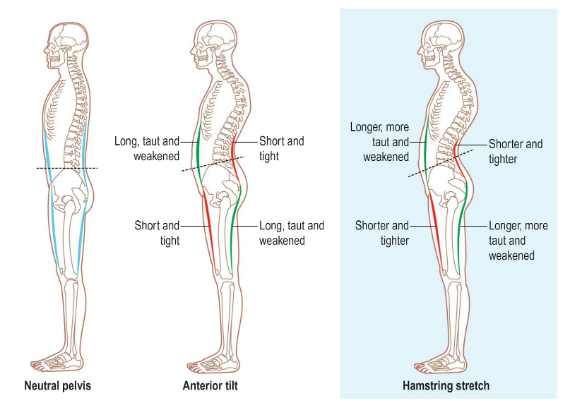 If we are stuck in this extended state, we are going to struggle to rotate. Our days out golfing are going to hurt instead of be enjoyable. Our ribs MUST be back in order for us to rotate (see THIS article for more info).

Our heels are a secret to unlocking our golf game. Heels will kick in hamstrings, glutes, and abs, which we all need in an effective swing. It will allow you to rotate freely while keeping you out of pain. This doesn’t mean you keep 100% of your weight in your heels as you swing so that you fall backwards. What I am describing is an even weight distribution, about 50% on your heels and 50% on your mid-foot.

Next time you hit the range or play a round, try this out! You can benefit enormously from just a simple change like this. At Sandhills Sports Performance, we specialize in helping clients find their heels and turn on the right muscles. If you would like to learn more, click HERE to sign up for a FREE complementary consultation with us!​

Sandhills Sports Performance is in Need of a Full-Time Physical Therapist!

Sandhills Sports Performance (SHSP) is in need of a full-time outpatient Physical Therapist (PT). We are a privately owned, Postural Restoration Certified Center in Southern Pines, NC. We are a unique physical therapy clinic that incorporates rehabilitation, strength and conditioning training as well as wellness-oriented programs. Our programs are holistic in nature, identifying the root cause of a problem verses symptom management. We are patient centered and home program oriented. We believe that education is the key to self-management, so our patients can return to a pain free functional lifestyle and understand how to help themselves. We’re looking for a thoughtful, energetic, hard-working individual that wants to work with our forward-thinking professionals. A preferred candidate has previous Postural Restoration training, but willing to train.

Physical Therapist will provide exceptional service to patients who have impairments, functional limitations, disabilities, or changes in physical function and health status resulting from injuries, disease, or other causes. Also, to prevent the onset, symptoms, and progression of impairments, functional limitations, and disabilities that may result from diseases, disorders, conditions, and injuries

Requirements (ideal candidates have the following):

Sandhills Sports Performance is growing. We are looking for a full-time Certified Strength and Conditioning Specialist/Certified Athletic Trainer and a full-time Physical Therapist.

We are a unique PRI clinic that incorporates physical therapy, strength training and conditioning, as well as wellness oriented programs. We are looking for an energetic hard-working individuals that want to work in one of the few multifunctional PRI clinics in the US.

Physical Therapist will provide exceptional service to patients who have impairments, functional limitations, disabilities, or changes in physical function and health status resulting from injuries, disease, or other causes. Also, to prevent the onset, symptoms, and progression of impairments, functional limitations, and disabilities that may result from diseases, disorders, conditions, and injuries.

The ideal candidate will have the following qualifications:

The Certified Strength and Conditioning Specialist/Certified Athletic Trainer will be responsible for a comprehensive program design, implementation, and supervision of clients of various ages and skill levels.

The ideal candidate will have the following qualifications:

Mrs. R is a 28 y/o female SAHM with three children ages 4, 18 months and 7 weeks. She reports a history of pubic symphysis pain, pelvic pain and R hip/SI pain which she rated at up to 6/10 at times. Mrs. R had previously been very active with running and triathlons and was able to resume normal activities not long after her first and second children were born. However, her pain persisted following this most recent delivery.  Based on her initial exam, physical therapy using Postural Restoration was indicated. Following treatment, Mrs. R reports that she feels 95% better, has nearly lost all of her pregnancy weight, has no pain, and is back to running and working out at home pain-free. This case details how PRI treatment at Sandhills Sports Performance can be an excellent alternative to help providers successfully manage their patients with pelvic pain.

Mrs. R is a 28y/o female, mother of three. Children ages 4, 18 mo, and 7 weeks old. She reports R hip/SIJ pain, bilateral pubic symphysis pain and pelvic pain following the birth of her son 7 weeks ago.  All three of Mrs. R’s pregnancies were full term with natural vaginal delivery with no complications and with no pelvic floor tearing of episiotomies. In her previous 2 pregnancies she denies much lasting pelvic pain beyond 4 weeks. She notes that she was able to run a half marathon 10 weeks after the birth of her second child. Mrs. R is also actively breast-feeding.

Her functional limitations at the time of evaluation were pain with prolonged sitting, standing, lifting her baby or other children, bending,  walking/running, or attempTing home workouts.

Tenderness to palpation at pubic rami and symphysis

Mrs. R’s examination findings indicate that she has an anteriorly tipped and externally rotated pelvis bilaterally.   As well as limited apical and posterior mediastinal expansion. This forward pelvis position is indicated by her inability to adduct or internally rotate either hip. In this forward position, the patient should not be able to fully extend their hips,  touch their toes, or have a SLR test  of 90 deg based on the anatomical structure of the lumbo-pelvic-hip complex.   On Mrs. R’s Right side she has full hip extension, greater SLR than L and she is able to touch her fingertips to the floor. This indicates that she has some pathology of the R hip indicating Illiofemoral/pubofemoral ligament laxity as well as muscles of the pelvic floor to be in a positionally descended, hypertonic and in an inefficient position.

We were also interested in Mrs R’s breathing mechanics as limited apical expansion and posterior mediastinal expansion are indicative of a descended and posturally oriented respiratory diaphragm. This position also contributes to long and weak internal obliques and transversus abdominus muscles and an increased lumbar lordosis. Research shows us that the pelvic diaphragm position mirrors the respiratory diaphragm and so in Mrs R’s case both are in a descended and weak position.

12 Postural Restoration sessions were conducted to reposition and properly stabilize her faulty pelvis and diaphragmatic position.

The 12 sessions were conducted over a 12 week period and included the development of a comprehensive, specialized home exercise program which was preformed 1-2x/day.

The objectives of the home program and PT sessions were to:

No pain upon palpation of SIJ, Symphysis pubis or R hip/SIJ

This exercise will benefit golfers looking to maintain abdominal stabilization in their backswing. It is best applied after repositioning the pelvis using PRI techniques.

Coaching keys are to maintain a slightly backward rotated pelvis, inhale with good opposition through the left abdominal wall, exhale and move your arms to the right. Inhale again as your arms move further to the right while feeling your left front ribs stay down. Continue this sequence for 5 breaths.