Why NASAL BREATHING is so beneficial

We all know the term “mouth-breather”. It has a pretty negative connotation to it, doesn’t it? Well, it should. And here’s why:

In order for us to gain a full understanding to why nasal breathing is so important, we must take a journey into childhood facial development. Just bear with me.

Mouth breathing affects the shape of the face in two ways. Firstly, there is a tendency for the face to grow long and narrow. Secondly, the jaws do not fully develop and are set back from their ideal position, thus reducing airway size. If the jaws are not positioned forward enough on the face, they will encroach on the airways. See for yourself: close your mouth, jut out your chin and take a breath in and out through your nose, noting the way air travels down behind the jaws. Now do the same but pull your chin inward as far as you can. You will probably feel as if your throat is closed up as you try to breathe. This is exactly the effect poorly developed facial structure has on your airway size. It is no wonder that those with restricted airways tend to favor mouth breathing.​ 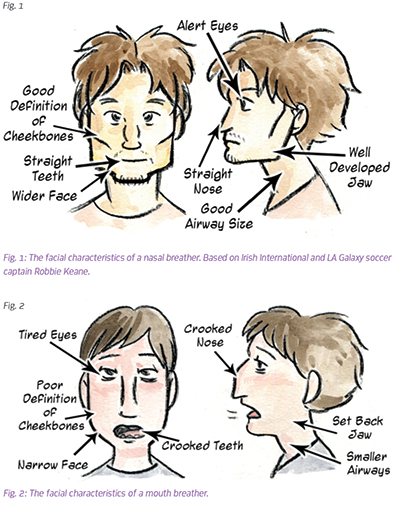 The second way facial structure is affected by the way we breathe during childhood is the position of the jaws. The way the jaws develop has a direct influence on the width of the upper airways. Our upper airways comprise the nose, nasal cavity, sinuses and the throat. High athletic performance requires large upper airways which will enable air to flow freely to and from the lungs. While effective breathing is crucial for high performance, having airways that function with little resistance is also very advantageous. For example, a marathon runner who has efficient breathing but airways the width of a narrow straw is not going to get too far.​

The features of figure 2 above are identifiable in thousands of children and adults who have fallen between the cracks of our health-care system and were not encouraged to breathe through their noses. These same individuals often suffer from poor health, low energy and reduced concentration. In the words of dentist Dr. Josh Jefferson: “These children do not sleep well at night due to obstructed airways; this lack of sleep can adversely affect their growth and academic performance. Many of these children are misdiagnosed with attention deficit disorder (ADD) and hyperactivity.”​

Fun fact: Why do some people snore so loudly? Well, it’s because their tongue falls back into their throat (not on the roof of their mouth) and their airway is already restricted as-is. No wonder they’re gasping for air with all that going on! We can’t expect those people to breathe well when they sleep.

Pretty crazy, right? Well, not all hope is lost if you relate to this. Try this out:

Generally, this exercise will unblock the nose, even if you have a head cold. However, as soon as the effects of the breath hold wear off, the nose will likely feel blocked again. By gradually increasing the number of steps you can take with your breath held, you will find the results continue to improve. When you are able to walk a total of 80 paces with the breath held, your nose will be free permanently. Eighty paces is actually a very achievable goal, and you can expect to progress by an additional 10 paces per week.

Additionally, here is a video that goes into further detail if you are interested in learning more!

Back pain – Why it doesn’t have to be that complicated

Back pain has been a difficult area to manage long-term for many people. However, it doesn’t have to be that way. Many physical therapists and trainers look at the back when that’s where the pain is, but that isn’t the most comprehensive approach. The thing is, the human body needs every joint to do its job, or else a change within one joint can cause a cascade of compensations down the chain. 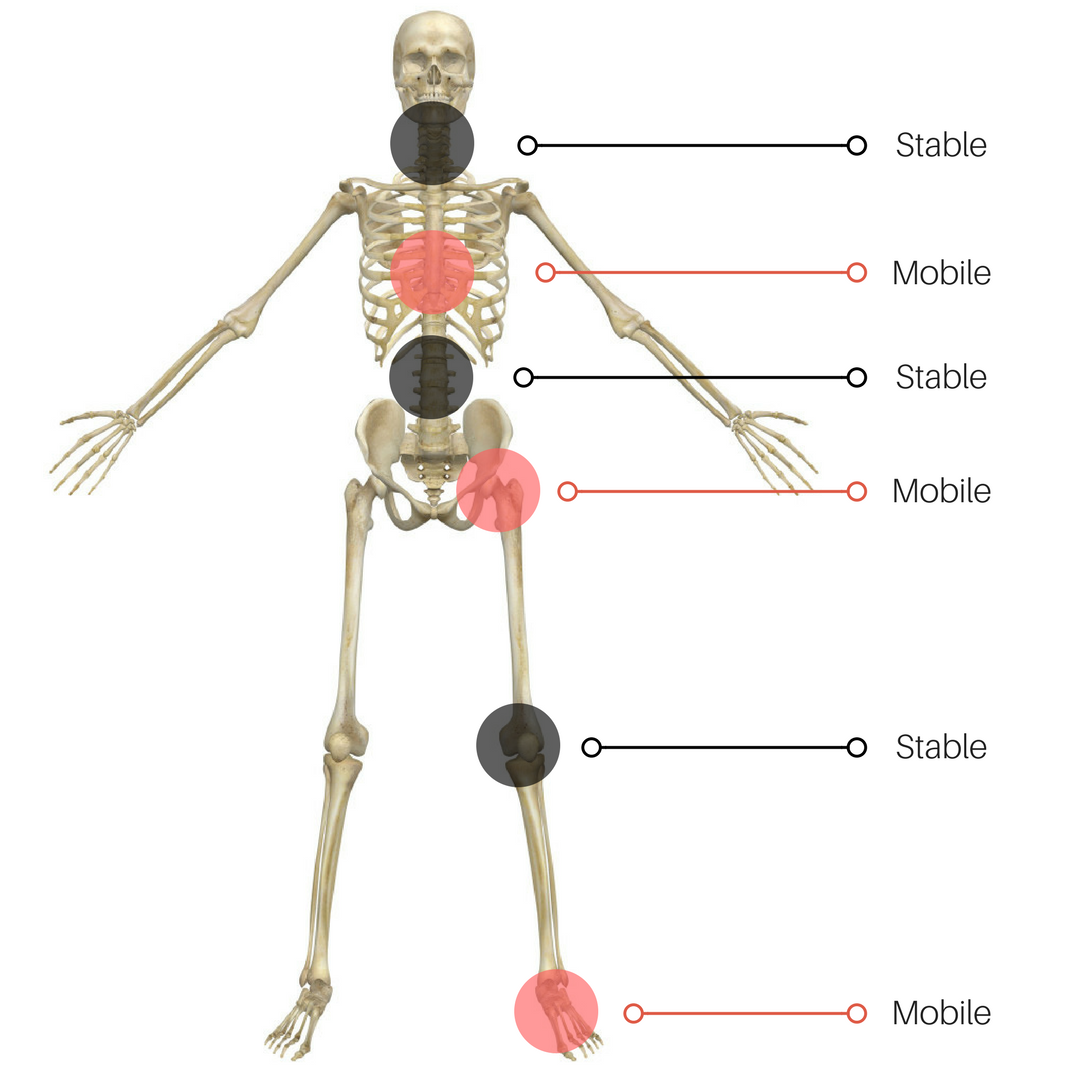 Your major joints alternate between mobility and stability purposes so that the stable joints provide stability for the body to move through the more mobile joints. Low back pain will occur because it is trying to be more mobile to make up for lack of mobility through the hips. In the naturally asymmetrical body, our left pelvis is forwardly rotated and the right pelvis is backwardly rotated. As a result, our femurs (thigh bones) compensate and cannot express full, healthy ranges of motion. If they cannot do that, then the back begins to be more mobile than it should be, causing you pain.

This picture illustrates the position we are stuck in with the aforementioned natural pelvic orientation. So what should we do? A significant amount of back pain cases I see are resolved through training the hamstrings and obliques through proper breathing, particularly on the left side to pull our left pelvis back. If we can get a more neutral pelvis AND breathe well, then we are addressing the root of the problem. Proper breathing is essential because it will help facilitate activation of the obliques and reinforce good ribcage mechanics. In addition, our body will understand that if it can breathe through a new position, the position isn’t a threat and we can maintain that position long-term.

​And that is EXACTLY what we do at Sandhills Sports Performance. We treat the body as an entire functioning unit, not as separate parts. This is our approach in both our physical therapy practice and wellness program.

Why all golfers must have reaching in their training

Do you feel that your backswing or follow through isn’t what it used to be? Are you unable to dissociate your pelvis from your hips? Does your swing feel stuck even after hours of practice? Those are just a few examples of symptoms of a stiff ribcage. A lot of humans, golfers included, have stiff ribcages that limit proper breathing mechanics. If you cannot breathe into your posterior mediastinum (your back ribs), your diaphragm cannot function optimally. To compensate, you will likely kick in your neck to assist you in pulling in air, further stiffening the muscles around your ribcage. 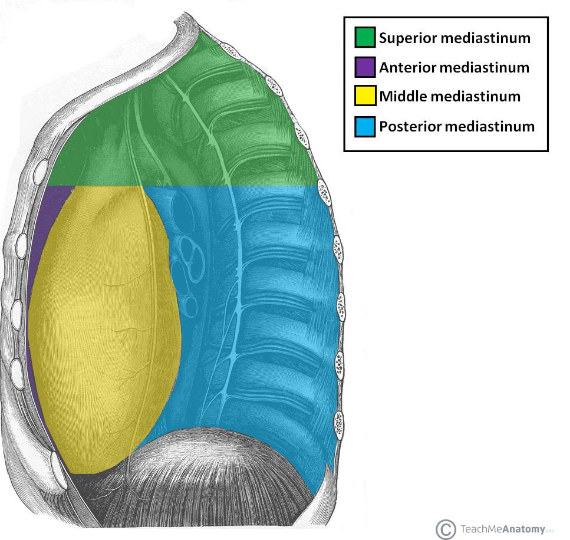 The secret is this: The posterior mediastinum can unlock your golf game. If you can breathe into it, you have the ability to rotate your thorax and thoracic spine freely. A good golf swing involves a posteriorly-rotated pelvis with the ribs back, which allows for optimal rotation. A free thorax will equal a smooth, controlled swing without mobility limitations. A stiff thorax will force you to compensate and use improper muscles such as your back to make up for a lack of mobility where it should be (in your thorax).

Reaching is absolutely one of the most necessary movements a golfer can have in their exercise program. Reaching activities bring down your ribcage to force air into your posterior mediastinum. A great example of this would be a Wall Supported Reach. Notice how her ribs are down and just her low back is on that wall, opening up her upper back to take in air. 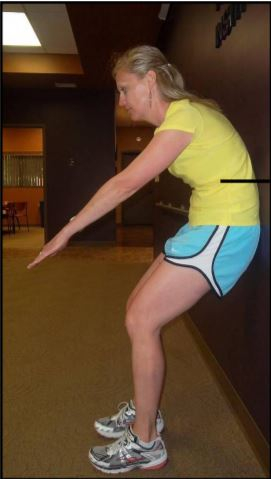 Correct breathing is the key to everything. Good respiration during activity will involve a inhalation through the nose and full exhalation through the mouth. Every day at Sandhills Sports Performance, I have every client do at least one reaching activity. It keeps them healthy, feeling good, and fires up all the right muscles.